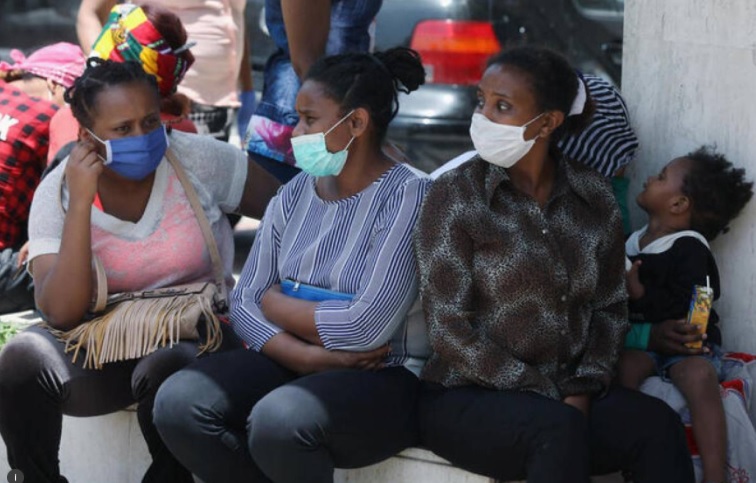 (Thomson Reuters Foundation) - Hundreds of Lebanon's most vulnerable migrant maids have been repatriated with funds raised by local charities, but thousands more remain stuck and destitute due to a deep economic crisis and the COVID-19 pandemic, according to campaigners.

Their top priority has been aiding women with health problems or young children and those who have lost jobs and accommodation during the crisis, which has worsened the plight of workers trapped in a system long compared to modern slavery.

"They have medical issues, some of them have kids, some of them are pregnant, some of them face domestic violence and want to get out of the country," said Banchi Yimer, founder of the Egna Legna Besidet workers' rights group.

So far, community-raised funds have mostly been used to provide essentials like food, shelter and medication for the migrants, but part of the money is being used to pay for travel, campaigners said.

Hundreds of women have now be flown to home nations including Ethiopia, Sierra Leone, Ivory Coast and Nigeria, despite numerous bureaucratic hurdles.

Lebanon hosts about 250,000 foreign workers, some working illegally, who are employed under the country's kafala sponsorship system which binds them to one employer and can lead to abuses, according to human rights groups.

Labour groups say that the true figures are likely to be much higher, with Ethiopians alone making up more than 400,000 of the migrant community.

The plight of Lebanon's foreign maids has captured global attention this year. Some women were left in the street by employers who could not afford to pay them, while others lost everything when a massive blast devastated parts of the capital.

"Everybody wants to go home - some have been waiting for months," Banchi told the Thomson Reuters Foundation. "But we can't afford to send 400,000 people... so we are picking the most vulnerable."

Governments including Ghana and Nigeria have scheduled repatriation flights from Beirut, but advocacy officer at migrant rights group Anti-Racism Movement Farah Baba said some had asked workers to pay for tickets in U.S. dollars.

That put them virtually out of reach for maids paid in devalued local currency.

Meanwhile, the International Organisation for Migration has also been coordinating with Lebanese authorities and foreign embassies, having pledged to help 2,500 stranded migrants return home after the Aug. 4 blast.

Beyond raising the money to pay for airfares, there are numerous hurdles for charities helping to repatriate workers.

Those who fled abusive employers - some without their passports - become undocumented and face penalty fees that make repatriation more complicated, Baba said.

The general security directorate, which oversees migrant travel, has said it began easing penalties on "absconding" workers just before the pandemic hit in March. It did not respond to requests for comment on the current situation.

Baba said penalties and complaints filed against workers who run away from their employers are arbitrarily waived on a case-by-case basis, usually at the request of their embassies.

"There has to be a systemic process. The situation in Lebanon is only getting worse on the economic, political and social level and (workers) can't keep waiting here for someone to save them."

Banchi said the migrants, who sought work in Lebanon to support their families back home, were returning to their countries in a desperate state:

"They work so hard for two or three years and they go back with zero and have to start over again."