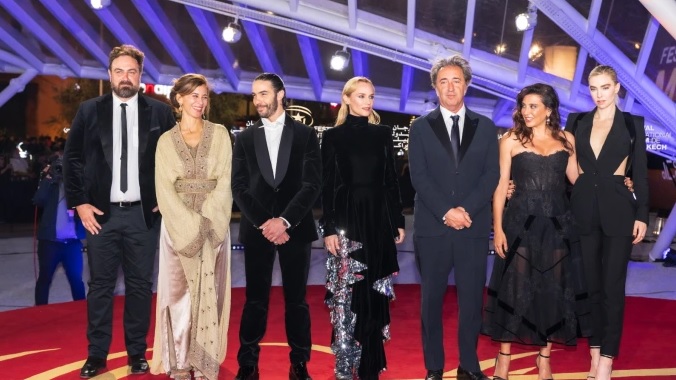 A Tale of Shemroon" by its Iranian director Emad Aleebrahim Dehkordi won the "Golden Star" (Grand Prize) of the 19th edition of the Marrakech International Film Festival, placed under the patronage of King Mohammed VI, announced the Jury of the official competition at the closing ceremony held Saturday evening at the city's sumptuous Conference Palace.

This 102-minute feature film tells the story of "Iman" and his little brother "Payar" who live with their father. After the death of their mother, "Iman" sees his life completely turned upside down and seeks a way out.

Taking advantage of his connections with the capital's youth, Iman sets up a small business to make easy money, and what at first seems to be the path to a new beginning, turns into a twisted cycle affecting the family's destiny..

This closing ceremony was also marked by the awarding of the Jury Prize handed over ex-aequo to "Alma Viva" by Cristèle Alves Meira (Portugal) and "Le Bleu du Caftan" by Maryam Touzani (Morocco).

As for the Best Director's Award, it went to the Swiss director Carmen Jacquier, for her film "Thunder", while the Best Actress Award was won by Choi Seung Yoon for her role in "Riceboy Sleeps" by Anthony Shim (Canada).

As for the Best Actor Award, it was awarded to Arswendy Bening Swara for her role in "Autobiography" by Makbul Mubarak (Indonesia).

Chaired by the great Italian director Paolo Sorrentino, the Jury of the official competition of this edition was composed of the British actress Vanessa Kirby, the German actress Diane Kruger, the Australian director Justin Kurzel, the Lebanese director and actress Nadine Labaki, the Moroccan director Laïla Marrakchi and the French actor Tahar Rahim.

True to tradition, this grandiose evening was also marked by a vibrant tribute to the great figure of the 7th art, the Scottish actress Tilda Swinton, who received the Golden Star from her daughter, Honor Byrne.

In addition to Swinton, the Marrakech International Film Festival also paid tribute to the Indian actor Ranveer Singh, the American filmmaker James Gray and the Moroccan director Farida Benlyazid who also received the Golden Star of the Festival.

On this occasion, Swinton expressed her deep gratitude to His Majesty King Mohammed VI, to His Royal Highness Prince Moulay Rachid, President of the Marrakech International Film Festival Foundation, and to the Festival Foundation for having made this high quality event possible, as well as for the constant support for the expansion of the horizons of the 7th art.

For his part, the Swedish director Ruben Ostlund highlighted the exceptional qualities of this famous actress and her ability to embody with mastery the various characters, thanks to her fertile intelligence, stressing that Swinton remains one of the greatest figures and ambassadors of the 7th art.

In addition to the feature movies competing in the official competition, 62 other films were screened in the "Gala Sessions", "Special Sessions", "The 11th Continent", "Panorama of Moroccan Cinema", "Young Audience" and "Open Air Screenings at Jamaa El Fna".

Some films of international and Moroccan stars to whom the festival has paid tribute have been screened at the Conference Palace, the Colisée cinema and Jemaa El Fna, completing this rich selection of 76 films, including 14 participating in the official competition.

Great names of world cinema were in free conversation with the public during this edition, as part of the program "In Conversation with ...", one of the festival's most eagerly awaited events.