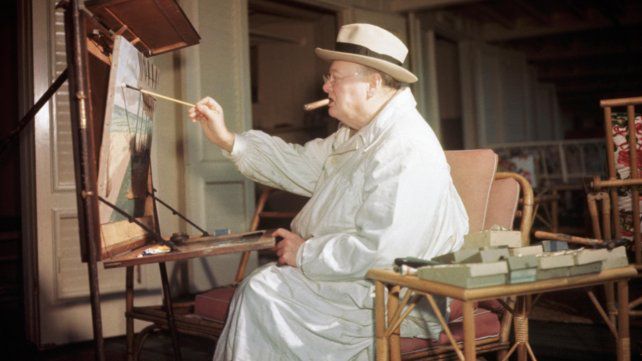 Tower of the Koutoubia Mosque by Winston Churchill is on its way to finding a new owner. The painting’s current owner, American actor Angelina Jolie is slated to sell the artwork for an estimated price of £ 1.5 million to 2.5 million. The Jolie Family Collection is selling the painting as part of Christie’s modern British art auction in London on March 1, 2021. If reports are to be believed, Tower of the Koutoubia Mosque is expected to set the auction’s price record.

The painting is known to be a piece of both political and Hollywood history. Churchill painted the Tower of the Koutoubia Mosque and presented it as a gift to President Franklin D Roosevelt. After Roosevelt’s demise in 1945, his son decided to sell the painting and had several owners before Jolie and her former husband, Brad Pitt, bought it in 2011.

The couple parted ways in 2016 and spent years in divorce proceedings, in the midst of rumors over the division of their vast art collection. They were legally divorced in 2019 after their attorneys applied for a bifurcated verdict, which means that two married people will be declared single, while other problems, such as finances and child custody, would cease to exist.

The painting of the 12th Century mosque in Marrakech at sunset, with the Atlas Mountains in the background, is the only painting completed by the British World War II leader during the 1939-45 conflict. Churchill painted it after the January 1943 Casablanca conference, where the two leaders, Roosevelt and Churchill, anticipated the defeat of Nazi Germany. The leaders visited Marrakech after the meeting so that Churchill could show President Roosevelt the city’s charm.