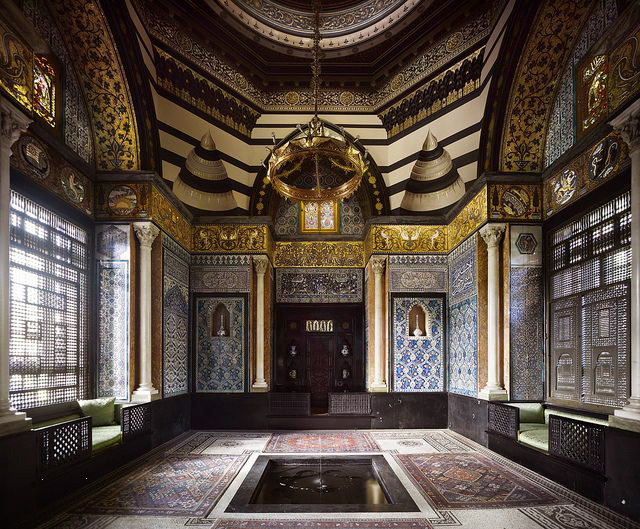 Hidden in a reasonably unassuming house in London's upmarket borough of Kensington and Chelsea is the Leighton House Museum, a wunderkammer of Islamic art and architecture. Now the traditional Middle Eastern decor is getting a permanent contemporary addition. As part of the building's major £7.8m refurbishment, which began in 2008 and is due to be completed this year, an 11m-high, hand-painted mural by the Iranian artist Shahrzad Ghaffari will decorate the walls of a new helical staircase.

The work, titled Oneness, is made up of turquoise, calligraphic brushstrokes that form a central motif inspired by the traditional designs of the Middle Eastern tiles in Leighton House Museum’s Arab Hall. Its spiralling form adopts the helical structure of the staircase. A fusion of Eastern and Western culture, the words will weave into an abstract form, drawing from the 13th-century Persian poetry of Rumi. The painting also reflects the pattern of DNA as the calligraphy sweeps into a double helix. The commission was part of a crowdfunding campaign, run by the UK charity Art Fund, which has seen the public donate £26,538 towards the centrepiece.

"This painting is a meeting of East and West and of old and new," explains Ghaffari. "It is a totem of union, evolving identity, and ultimately it’s an expression of love. Coming from a long line of artists (spanning 150 years), I’ve always been in flux between tradition and modernism, and being trusted with the first permanent contemporary artwork at the ‘new’ museum is incredibly exciting."

Leighton House Museum is the former home and studio of the Victorian artist Lord Frederic Leighton, who filled the building with art and objects from the Middle East as well as recreating Islamic architectural features like domes and internal fountains. The museum's redevelopment project will restore the interior as well as extend its space, providing storage for the museum's collection and archives; a new gallery; a new cafe; and greater accessibility for visitors. The project has been funded by the Friends of Leighton House, the National Lottery Heritage Fund and the Royal Borough of Kensington and Chelsea.