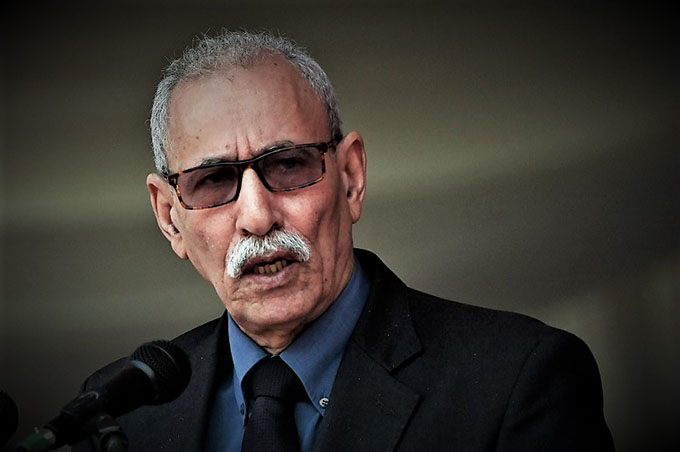 Spanish and Algerian governments have found themselves in a great embarrassment after the French magazine ‘Jeune Afrique’ leaked news revealing that the Polisario front leader, Brahim Ghali, exist in San Pedro Hospital in the city of Logroño in the north of Spain under a pseudonym, for treatment, after his health has deteriorated due to his long-suffering from cancer in the digestive system.

Sanchez's government embarrassment returns to the fact that the Polisario leader is wanted for Justice in Spain, because of his involvement in crimes related to “genocide and rape”, but even so, it allowed him to enter its territory under the pseudonym “Mohamed Ben Battouche”.

Algeria, who remained silent after leaking the news, it was it who granted Ghali an Algerian passport with a false identity, and a private plane belonging to the presidency, in order to enter Spanish territory, which is a legal violation inside Spanish territory by a sovereign state.

So, how did this embarrassing bomb explode in the face of the Spanish and Algerian governments?

Exclusive data, Assahifa English succeeded to obtain, confirmed that Moroccan intelligence obtained information regarding the arrival of Polisario’s leader to Spain via a private plane belonging to the Algerian presidency, which landed on Sunday evening at Zaragoza International Airport.

Hours later, it became clear that Brahim Ghali had entered Spanish territory, but under a pseudonym, "Mohamed Ben Battoush", as the Moroccan intelligence began to collect data that confirmed that the leader of the Polisario arrived at the Spanish airport in Zaragoza in a critical condition, accompanied by some elements of the Front And two members of the Algerian intelligence, where he was received at the airport by employees attached to the Algerian embassy in Spain before he was rushed to the hospital "San Pedro" in Logroño by an ambulance.

When the information was confirmed for the Morocco intelligence, it leaked it to the French magazine ‘Jeune Afrique’ who exclusively published the news supported by precise data, then the news was widely published in the Spanish and International press.

Algeria, who planned to transfer Ghali to Spain ‘secretly’, after it found itself in an embarrassment with Spain, it decided to deny the news through the right arm of the leader of the Polisario Front, Bashir Mustafa Al-Sayed, who went out on the same day to state for the Spanish news agency EFE that the information that tells Brahim Ghali is in Spain is false.

He said in a statement to the agency, "The President of the Polisario is sick and suffers from complications from the Coronavirus, but he doesn't exist in Spain". He added, in the same statement that "Brahim Ghali is undergoing treatment in a hospital in Algeria and his health condition is improving."

In the midst of the data package that Moroccan intelligence leaked to the French magazine ‘Jeune Afrique’, it seemed impossible to continue denying the existence of the separatist front’s leader on Spanish soil, especially after the Spanish press became interested in the matter and began publishing more information about Brahim Ghali’s presence in San Pedro Hospital.

All these leaks paved the way for the statement of the Minister of Foreign Affairs and the European Union, Arancha Gonzalez Laya, during a press conference following her meeting with her Palestinian counterpart Riyad al-Maliki today, Friday when she confirmed that Brahim Ghali "was transferred to Spain for purely humanitarian reasons in order to receive health care," Adding in the same context that this step "will not lead to a disturbance of relations with Morocco."