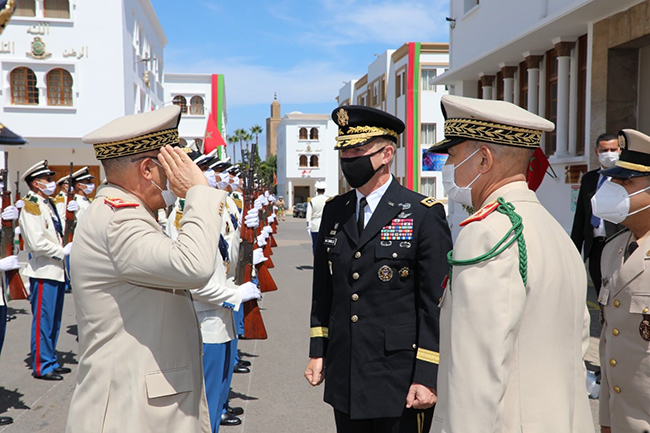 Gen. James C. McConville, Chief of Staff of the U.S. Army, was received, Monday in Rabat, respectively by the Moroccan Minister Delegate to the Head of Government in charge of the National Defense Administration and the Lieutenant General, Inspector General of the Royal Armed Forces (FAR), following the instructions of the King Mohammed VI, according to MAP news agency.

Abdeltif Loudyi, Minister Delegate to the Head of Government, in charge of the National Defense Administration received, Monday, at the headquarters of this Administration, Gen. James C. McConville, Chief of Staff of the U.S. Army, who is on a working visit to the Kingdom, says the FAR General Staff in a statement.

The two officials expressed their satisfaction with the density, sustainability and excellence of bilateral cooperation relations, through training and experience sharing actions and through the regular holding of joint exercises, in particular the "African Lion 2021" exercise, the 17th edition of which is the best realization of the high level of interoperability reached by the armies of the two countries. Mr. Loudyi highlighted on this occasion the unwavering commitment and multidimensional strategy led by the Kingdom under the leadership of His Majesty the King in terms of managing security challenges, migration crisis and the COVID-19 pandemic, the source points out.

On the same day, and on the instructions of the King, Supreme Commander and Chief of General Staff of the Royal Armed Forces, the Lieutenant General, Inspector General of the Royal Armed Forces (FAR), received at the General Staff of the FAR in Rabat, the US official, who is a leading a military delegation from his country. While affirming their attachment to the principles and objectives of Moroccan-U.S. military cooperation, the two military officials examined the opportunities to further develop military cooperation, including in training, combined exercises as well as the sharing of experiences and expertise between the Royal Armed Forces and the American Army.

The strategic cooperation between the Kingdom of Morocco and the United States of America led, in October 2020, to the signing of a memorandum of understanding outlining the ten-year roadmap "2020-2030", for the consolidation of bilateral relations in the field of defense, the statement concludes.