Guterres: Morocco Has Long Been Champion of Inter-Faith Dialogue, Leader in Fight Against Extremism 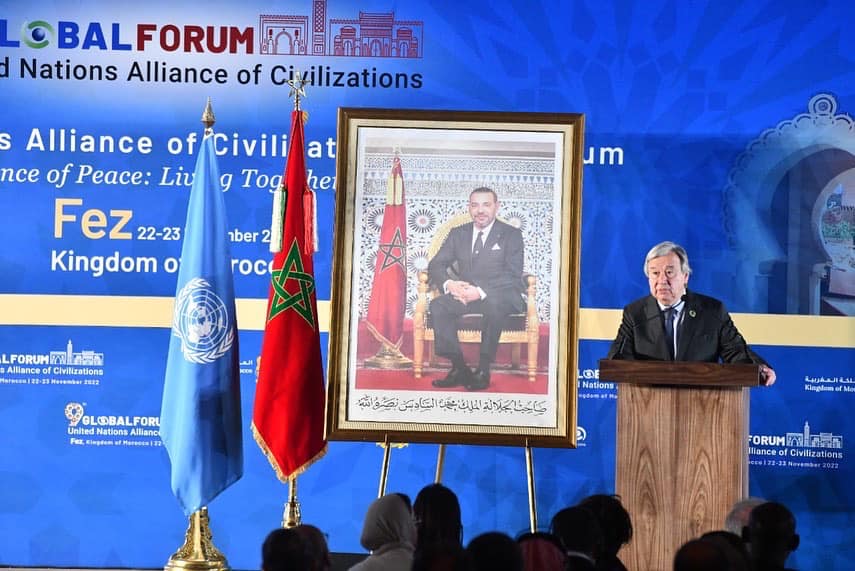 Morocco "has long been a champion of inter-faith dialogue and a leader in our fight against extremism", the UN Secretary General, Antonio Guterres, said on Tuesday in Fez.

In a speech at the opening of the 9th Global Forum of the Alliance of Civilizations (UNAOC), which takes place on November 22-23, Guterres said that Morocco is "a natural host for this Forum," commending the "inspired choice" of Fez as the place of this gathering.

"This rich and ancient history makes Fez the ideal place to gather and reflect on the state of our world", he said.

The UN SG also expressed his thanks to His Majesty King Mohammed VI "for His personal and permanent commitment to the defense of interreligious and intercultural dialogue, tolerance and diversity as a richness for our societies and our world."

Referring to the global context marked by crises of trust and breakdown of values, Guterres noted that hate speech, disinformation, and abuse are proliferating, targeting especially women and vulnerable groups.

"Intolerance and irrationality are running rampant. And old evils – antisemitism, anti-Muslim bigotry, persecution of Christians, xenophobia, and racism – are receiving new leases on life," he warned, noting that these hateful and harmful afflictions feed off each other and foment divisions.

In this regard, the UN chief called for building an alliance of peace that spans the global and the local "to meet the tests of our time.".

"At this time of peril, let us take inspiration and stand together as one human family. Rich in diversity, equal in dignity and rights, united in solidarity," concluded Guterres.

The 9th Global Forum of the United Nations Alliance of Civilizations (UNAOC), which aims to strengthen dialogue and cooperation between communities, cultures and civilizations, opened Tuesday in Fez, with the participation of eminent personalities.

The opening session of this two-day forum, held under the theme: "Towards An Alliance of Peace: Living Together as One Humanity", was marked by a message addressed by HM King Mohammed VI to the participants, which was read by Mr. André Azoulay, Advisor to HM the King.

Co-chaired by the Minister of Foreign Affairs, African Cooperation and Moroccan Expatriates, Nasser Bourita, and the High Representative for the United Nations Alliance of Civilizations, Miguel Angel Moratinos, this event is attended by many prominent figures including the UN Secretary-General, Antonio Guterres.

A thousand participants of official delegations belonging to the group of countries and organizations friends of the alliance, civil society, actors in the field of action of the alliance, academics, young professionals and students take part in this forum.

This international event aims to promote dialogue and cooperation between different communities, cultures and civilizations, and to build bridges that unite populations and people beyond their cultural or religious differences, developing a series of concrete actions aimed at conflict prevention and peace building.