Interview with Assahifa: US ambassador talks about his love for Morocco and future of Sahara under Biden administration 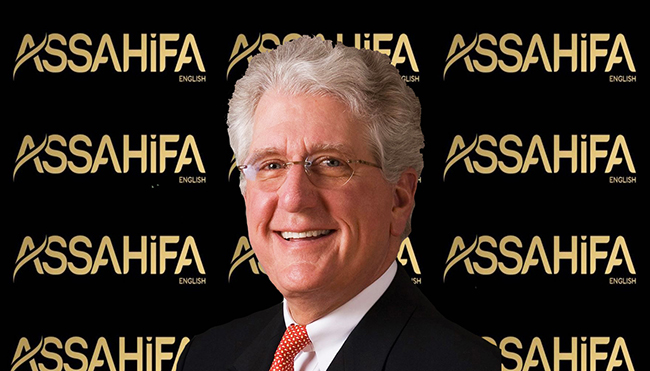 Despite the short period that Mr. David Fischer spent in Morocco as a US ambassador (approximately a year), he was able to register that period with remarkable presence to the point that he is probably the first US ambassador to be known by his name among a large portion of Moroccans.

His activities and efforts to strengthen the US-Morocco ties will bear witness forever, as many Moroccan observers believe.

Mr. Fischer announced last Monday the end of his mission in Morocco, and he and his wife Jennifer prepare to depart Morocco, a country that they fall in love with.

Assahifa English had the opportunity to interview Mr. Fischer, who kindly opened his heart and mind to answer our questions.

1 - Mr. Ambassador, you have been in Morocco since early 2020. What could you say about this country in terms of personal impressions?

It has been the honor of my life to be the United States Ambassador to Morocco. Morocco is one of the most wonderful, beautiful, hospitable countries in the world – and one of the most important and oldest friends of the United States of America.
Before becoming an ambassador, I already knew Morocco was an exceptional country and that Moroccans are exceptional people, but nothing could prepare me for how truly remarkable the Kingdom is.
My wife Jennifer and I have visited nearly every corner of Morocco.
Jennifer and I have loved every moment of our time here. The beaches of the Mediterranean and Atlantic, the Atlas Mountains, and the desert sands.
The factories of U.S. companies in Kenitra and Casablanca, and the winding medinas of Marrakech and Fes, which will soon be filled with American tourists once again.
The American Legation in Tangier, the site of the future new U.S. Consulate in Casablanca, and the potential future site of the new Consulate in Dakhla.
Morocco is near and dear to our hearts and always will be. It is a country that is easy to fall in love with. The warmth of its people is simply unmatched.

2 – Lately, you have talked about buying a residence in the city of Dakhla in the south of Morocco. Do you have plans to settle or live in the Kingdom of Morocco in the Future?

When I visited the south, I mentioned to the press there that I might want to buy a villa in Dakhla. I was joking at the time, but now that everyone keeps asking me about it … You know, it might not be a bad idea.

3- Many Moroccan observers consider you the first US ambassador who announced his full support to Morocco's attitudes towards the Sahara dispute. What are the reasons behind that?

It is time for new thinking. We need to move toward a serious, realistic, and credible solution to the conflict there.
The United States believes that autonomy is the only realistic option to achieve a just, lasting, and mutually acceptable solution for the future of the Moroccan Sahara. The status quo had existed for over forty years, with no solution. Finding that solution requires new thinking, bold leadership, and a desire for lasting peace.
We continue to urge all participants to constructively engage with the UN and consider new, creative and genuine ways to move the peace process forward.

4– From your perspective, how do you think the Biden administration would deal with the Trump administration's steps towards Sahara's conflict?

First, I am 100 percent sure that the incoming Biden administration will nominate a highly qualified individual to fill this ambassadorial post, someone who will build on all that we have done together, and that the United States and Morocco will grow and prosper together as we have for over two centuries.
Second, Morocco is one of the oldest and closest allies of the United States and every presidential administration since President Clinton has affirmed its support for Morocco's autonomy proposal.
The United States continues to believe that only political negotiations are capable of resolving the issues between Morocco and the POLISARIO, and supports UN efforts to facilitate a peaceful resolution of the conflict. We look forward to continuing engagement with Morocco, the POLISARIO, and all regional and international stakeholders to find a constructive way forward. We encourage the parties to engage constructively within the framework of Morocco's autonomy plan, and we continue to press for the appointment of a new Personal Envoy of the UN Secretary-General to facilitate this historic solution.

5 – The Maghreb region faces many challenges such as terrorist threats, poverty, illiteracy, unemployment… etc. From your perspective, what do you think has to be done to solve these challenges?

The United States and Morocco have been working together to confront all these challenges.
Morocco remains a critical partner on a range of security issues. It participates in more than 100 military engagements with us yearly, hosts African Lion -- our largest yearly military exercise on the continent – and is a major partner in our International Military Education and Training program.
In October, our countries signed a 10-year roadmap for defense cooperation, a symbol of our long-term strategic partnership.
Additionally, Morocco pays for over 1,200 regional and sub-Saharan military students yearly to attend various military schools in Morocco, making the Kingdom a premiere' security exporter' in Africa.
The United States and Morocco have enjoyed robust and long-standing counterterrorism cooperation working closely to safeguard both countries' national security interests. The Government of Morocco has implemented a comprehensive counterterrorism strategy that includes vigilant security measures, regional and international cooperation, and counter-radicalization policies. Morocco's successful counterterrorism efforts have worked to mitigate the risk of terrorism.
Beyond the security sphere -- we need to focus on economic growth and education to make sure that we are creating opportunities for our young people to flourish, both here in Morocco, throughout the Maghreb region, and around the world.
Morocco is already well situated for an economic revival as we emerge from the COVID-19 pandemic, and the United States is proud to be investing in that future. King Mohammad VI's bold leadership has expertly positioned Morocco as the economic "Gateway to Africa," thanks to the Kingdom's free trade agreements with the European Union and countries in the Middle East and Africa.
Morocco is also the only country in Africa to have a free trade agreement with the United States. Jan. 1, 2021 marked 15 years since that agreement officially took effect. Over 150 American companies operate here, creating jobs for the local economy.
A major focus of mine over the past year has been to support Morocco's public education system. When I speak with Moroccans, they often ask for more English
instruction in schools, because they understand the importance of English in today's world.
I listened and I acted. In close partnership with the Ministry of Education, USAID was able to obtain a record amount of funding for English instruction in public schools in Morocco.
This will increase English instruction throughout the public school system, providing Morocco's youth with an invaluable asset for their future in the modern economy.
This past year, the Embassy has also provided online professional development courses to over 550 public sector English language educators across Morocco. This took place through the U.S. government's Virtual English Language Fellow Program.
Separate from our support for English-language instruction, USAID's "Reading for Success" program is significantly improving reading skills for Moroccan primary school students, reaching over 4 million students during this past year, in partnership with the Ministry of Education.
We also are supporting vocational training in a variety of ways. For example, we are pursuing partnerships and funding with the Moroccan government to enhance the production of traditional Moroccan silver jewelry. Courses will be offered in partnership with the Ministry of Education throughout the public school system.
I'm also proud to have supported the Millennium Challenge Corporation's $450 million compact with Morocco. This partnership is strengthening land security and education for future generations of Moroccans, and is creating 12 new industrial zones.
This is MCC's second Compact with Morocco. The first Compact upgraded key industries in Morocco, including agriculture, fishing, and tourism. Between these two MCC Compacts, the United States government has invested over $1.1 billion dollars in modernizing the Moroccan economy and supporting the Moroccan people.
I'm not done yet. Over the past year, the U.S.-Middle East Partnership Initiative – known as MEPI – launched four new projects with nearly $600,000 in funding, focused on fostering economic entrepreneurship and political participation. Earlier this month we launched the MEPI-funded Dakhla Connect program, which will help improve the economic environment in Morocco's southern provinces.

6– Your recent attitudes in favor of Morocco have been welcomed widely among Moroccans. Do you have intentions to keep defending the Moroccan interests somehow in the future?

Jennifer and I love Morocco, and we plan to maintain our strong connections with the Kingdom and our many, many close friends here.

7 – You have met and talked with King Mohamed VI on several occasions. What are your personal impressions about him?

On my very first day here, I had the honor of meeting His Majesty King Mohamed VI. That meeting set the tone for everything that has followed. I would like to thank His Majesty for the foundation he created to guide the U.S.-Moroccan friendship towards an ever-closer partnership.

8– Last question, Mr. Ambassador, what are your next steps after departing Morocco?

Jennifer and I have 10 wonderful grandchildren. We look forward to spending time with them and sharing stories about our adventures in Morocco.