Morocco: 9th Global Forum of UN Alliance of Civilizations Kicks off in Fez 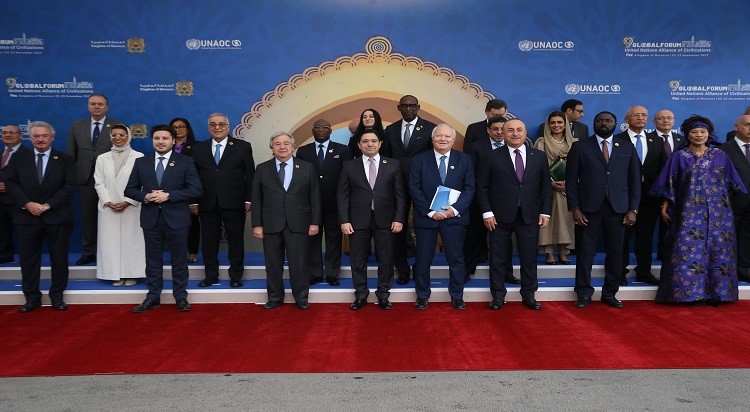 The 9th Global Forum of the United Nations Alliance of Civilizations (UNAOC) opened on Tuesday in Fez, with the aim of strengthening dialogue and cooperation between communities, cultures and civilizations.

The opening session of this two-day forum, held under the theme: "Towards An Alliance of Peace: Living Together as One Humanity", was marked by a message addressed by King Mohammed VI to the participants, which was read by Mr. André Azoulay, Advisor to the King.

In this message, the Sovereign stressed that the values of the UNAOC, the ideals it stands for and the paradigm it promotes are the exact same values, ideals and paradigm championed by Morocco.

The King affirmed that that the Kingdom of Morocco has been involved in all of the organization's struggles for reasons that are inseparable from its identity and for others that are inherent to the country's commitments.

From the outset, Morocco has been committed to this basic policy; it has remained steadfastly attached to it, stressed the King, noting that the Kingdom has shown its commitment by promoting openness as a pillar of the culture of peace, by living religion as a vehicle of peace and by working for development - in the broadest sense of the term - as an ingredient of peace.

Co-chaired by the Minister of Foreign Affairs, African Cooperation and Moroccan Expatriates, Nasser Bourita, and the High Representative for the United Nations Alliance of Civilizations, Miguel Angel Moratinos, this event is attended by many prominent figures including the UN Secretary-General, Antonio Guterres.

A thousand participants of official delegations belonging to the group of countries and organizations friends of the alliance, civil society, actors in the field of action of the alliance, academics, young professionals and students take part in this forum.

This international event aims to promote dialogue and cooperation between different communities, cultures and civilizations, and to build bridges that unite populations and people beyond their cultural or religious differences, developing a series of concrete actions aimed at conflict prevention and peace building.

The organization of this forum in Morocco demonstrates its effective commitment to the principles of dialogue, coexistence and respect for others.

This large-scale event represents a unique opportunity to deepen discussions and debates on the prevention and fight against violent extremism; the central role of education; the role of women as mediators and peacemakers; the fight against anti-Semitism, Islamophobia and Christianophobia; sport as a vehicle for peace and inclusion; balancing migratory narratives through programming; the role of religious leaders in promoting peace; coexistence and social harmony; reinvigorating multilateralism through the culture of peace; and the fight against online hate speech.

The program of this 9th Edition of the Global Forum of the United Nations Alliance of Civilizations, co-sponsored by Spain and Turkey, includes a UNAOC Group of Friends High-Level Ministerial Meeting.

The proceedings of this forum will be closed by the adoption of the Declaration of Fez.