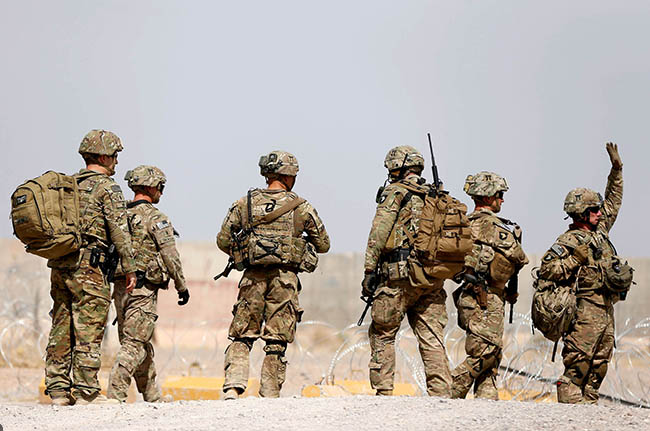 As the Biden administration weighs whether to remove all US troops from Afghanistan by May 1 — upholding the Trump administration's agreement with the Taliban — its discussions should focus on one main concern: preventing future terrorist attacks on the United States or its allies from Afghan territory. Since 9/11, this objective has guided US engagement across four presidencies.

Those who argue that we need to stay in Afghanistan to thwart attacks against the homeland are wrong. Biden should keep in mind the obvious: 2021 is not 2001. The terrorist threat from Afghanistan has been dramatically reduced in the last 20 years. The departure of US troops is not only possible, but desirable.The United States and its coalition partners have devastated al Qaeda and crippled its ability to strike across borders. The terrorist group has not been able to carry out a major overseas attack since the bombings in London in 2005. Its leaders have been in hiding for years, although mostly not in Afghanistan, as became clear in the 2011 raid in Pakistan that killed Osama Bin Laden. The Taliban does maintain links to al Qaeda, including through family ties. Yet the several hundred remaining al Qaeda fighters in Afghanistan and Pakistan pose a minor threat, especially compared with the group's more dangerous branches in Yemen, Somalia, Syria and the Sahel.The same goes for the Afghanistan branch of the Islamic State, which has shown no ability to carry out transnational attacks and is under constant military pressure from the Afghan state and the Taliban.

errorist groups like al Qaeda can regenerate, of course, but rebuilding in Afghanistan would be difficult, even if the Taliban becomes part of a future government. Since 2001, the United States and its international partners have made slow but substantial progress in developing Afghan institutions, including domestic security forces comprising more than 300,000 members of the army and police.

The Afghan intelligence service and special forces are today among the best in the region and able to operate routinely without US help. And, of course, the United States will always be able to strike terrorist targets in Afghanistan from bases outside the country.The civil and political landscape of Afghanistan has also evolved. Governing institutions have matured. Women are better integrated into the public and private sector, although much more progress is necessary. Print, broadcast and social media, as well as health care and education have made significant strides.

Yes, Afghanistan remains chronically unstable, with thousands dying each year from the ongoing war, extreme poverty and endemic corruption. Economic and political support from the international community must be sustained to keep the country moving forward. If such international support continues as international troops depart, it's quite unlikely that Afghanistan will revert to a Taliban-ruled harbor for al Qaeda.The Biden administration surely recognizes that the ongoing talks in Doha between the Afghan government and the Taliban constitute the best opportunity in decades to stabilize the country and end 40 years of war. All forms of US engagement — military, political and economic — should support these negotiations. Washington has taken an important step in the right direction with its recent call for backstopping the Doha process with a robust set of diplomatic measures, including a UN-sponsored gathering of envoys from China, India, Iran, Pakistan, Russia and the United States.If the US reneges on its May departure deadline, it would most likely scuttle the Doha negotiations. It makes no sense to jeopardize the best chance for Afghanistan's future by sustaining a US military presence to counter a largely neutralized terrorist threat.

ince 9/11 the United States has decimated al Qaeda, given Afghans an opportunity to determine their own future, honed the ability to strike terrorists anywhere at any time, built a global network of partners to fight terrorism, and significantly enhanced domestic defenses against terrorist attacks. The creation of the Department of Homeland Security and the director of national intelligence has improved coordination and information sharing across the US government and with global partners. America is a much harder transnational terrorist target than it was on 9/11.These measures do not guarantee that the nation will never be struck again. But together they provide confidence that the United States is much more secure than it was in 2001. Americans must remain vigilant against the threat of terrorism, both homegrown and from foreign bases. But such vigilance does not require keeping US troops in Afghanistan.