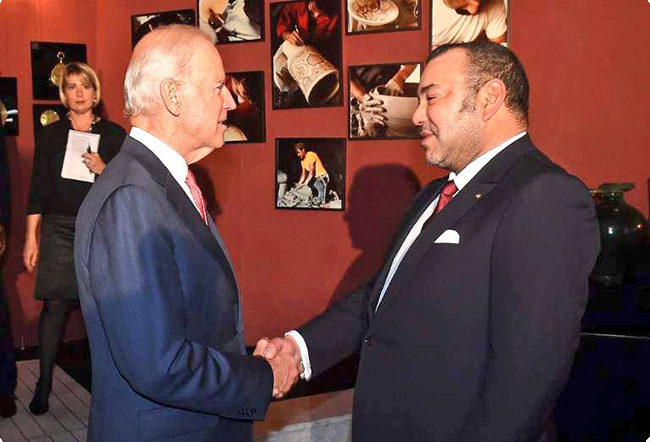 The United States' recognition of Western Sahara as a Moroccan land dropped like a bombshell not only in capitals of the countries concerned and especially in Rabat and Algiers, but in the corridors of the United Nations and the Security Council.

The United States of America is not a typical country, it is a permanent member of the Security Council and the greatest power in the world and on its hands lays the broad lines of international and strategic policies. Therefore, most of those interested in the "Sahara" case, since the day former US president Donald Trump has tweeted about it, begged the question about what the new president Joe Biden will decide on this political issue.

Far from the separatists myths and those who do not distinguish between daydreams and the current geopolitical reality, diving into the expectations of the current US administration’s handling of this case, which is considered one of the oldest conflicts in the world, must evoke first of all the US national interests and the political trends of influential members among the new US administration without neglecting the strategic US relations with countries that had been involved directly or indirectly in the "Moroccan Sahara" case.

The presidential proclamation issued by Donald Trump, which confirms "that the United States of America believes that an independent state in Western Sahara is an unrealistic approach to resolve the conflict and that autonomy within a Moroccan sovereignty is the only possible solution ", it’s a state decision not a personal one, even if it came from the president, according to a close source from the new American administration as stated in the "Washington Post".

Perhaps the Biden administration’s first public position coincided with the inauguration of Joe Biden when Antony Blinken, the new secretary of state, appeared before the Congressional Foreign Affairs Committee to demarcate his appointment, as he said:"It’sonly appropriate to applaud the decision of normalizing relations between Israel and some Arab countries, which would support the efforts of peace in the region, and I think we will build our position on the base of that decision "

However, he added: "We have to carefully study some of the American obligations that have been taken based on this normalization", undoubtedly, referring to the US F35 fightersdeal for the benefit of the United Arab Emirates and the removal of Sudan from the list of countries sponsoring terrorism, as well as the US new position on the Moroccan Sahara conflict.

And if Antony Blinkenconfirms that the US administration will build on the aforementioneddecisions, then it will certainly bring up many updates which focus on the presidential proclamation signed by Trump, declaring the position of the United States that aligns itself with the kingdom of Morocco without equivocation.

The interest of the United States of America is the most important pillar on which the Joe Biden administration is based on the following:

Regardless of the rhetoric of emotions and grievances that emphasize on Morocco being the first country to recognize America more than two centuries ago, which is what Morocco’s opponents in Congress consider as useless folklore, it is self-evident to expect that Washington puts in the contemporary geopolitical balance that Morocco was an ally during the Second World War and the following five decades of the Cold War, the kingdom always lined up with Washington, even on highly sensitive issues like the Gulf War.

As for today’s reality, Morocco’s status is within the circle of allies of the United States of America in its war against terrorism, whether in the Middle East or in Africa.

Perhaps the cooperation of General Directorate of National Land Monitoring with the CIA only a week ago, in the arrest of the American soldier Cole James, who was intending to carry out terrorist attacks in New York, is another evidence of the depth of cooperation between the two countries. It must also be mentioned that Morocco is the only African country to conduct annual exercises with US Army on African soil, and that Rabat and Washington signed a defense cooperation agreement only three months ago. Then there is a talk of moving the headquarters of the American military command in Africa "AFRICOM" from Germany to Morocco, and overcoming South Africa’s 2007 refusal to have these forces present on African soil. This would give the United States additional weight in the continent.

The volume of trade exchange between Rabat and Washington is far from the ambitions of the two countries and does not reflect the depth of the relations between the two sides. however, the free trade agreement signed between the two countries in 2006 made these exchanges witness a significant boom, moving from 1.34 billion dollars in 2006to 5.44 billion dollars in 2018. There is still room for improvement. For reference, it is the only free trade agreement that links the United States of America and an African country, knowing that Washington seeks to harass China within Africa after Beijing clearly dominated the African continent and became the first partner in Africa, followed by the European Union, while the United States of America is ranked onlythe third. And consequently, it needs a base that will perform as the home groundfor its new strategy towards Africa, through which it envisages correcting the four years that the Trump administration wasted when it left the "playing ground empty" for China. Here lies the importance of the Dakhla Consulate, whose role has been devoted to African-American economic cooperation and investments by American companies in the African continent, and it is the diplomatic committee that the former US ambassador in Rabat, David Fischer, described it as "The future gate to Africa". Then we cannot forget that the Kingdom of Morocco is one of the few countries in the world that has benefited from the American program "Millennium Challenge" in two stages with a total of 1.1 billion dollars, which indicatesthe depth of relations between the two countries.

No one denies that the United States of America has invested a lot in achieving peace for Israel by loosening the regional belt around it, and this is what was done through the development of Tel Aviv’s relations with Gulf countries joining Jordan and Egypt, and on the other hand by expanding peace agreements to countries far from the "belt region", like Sudan and Morocco, to support Israelgeo-strategically.

In this specific area, the Democratic party meets the Republican party on an agreement, and their differences dissolve and fuse within the American-Israeli Public Relations Committee (AIPAC), which is the most influential Jewish lobby in American foreign policies since 1963 and the official supporter of Israel in the Unites States of America throughout successive administrations. In this regard, the position of American Jews on one hand, and Israelis of Moroccan origins on the other hand, will inevitably be present at the Biden administration in taking any decision regarding the future of Moroccan-American relations. The position taken by Antony Blinkenand Lloyd Austin, which they hold  respectively, the Secretary of State and the Ministry of Defense, before the Congressional Foreign Affairs Committee, was avoiding going into the details of Washington’s recognition of Western Sahara as a Moroccan land, as Austin did with Senator Jim Inhofe, who is known for his support for the Polisario Front, who wanted him to take a position on "organizing the referendum in the disputed Sahara", but Austin replied that he "cannot respond as long as he has not yet studied the merits of this decision".

It is clear that the priority of the Biden administration is based on the narrow interest of the United States and the strategic depth of the US-Israeli relations. Therefore, only a delusional will believe that Biden’s team will cancel some decisions taken by Donald Trump only in defiance of the latter or for considerations outside the interests referred to above. The Biden administration can take a lot on Trump’s policies, but it will not deny that it has spared the new administration from making difficult decisions, such as relocating the American embassy to Jerusalem and Arab-Israeli normalization, which were complex operations  that required years of negotiations to preserve the interests of all parties and respect the mutual obligations, and therefore it is not possible for the American administration under any normal circumstances  to preserve the privileges of those agreements and at the same time abandon its obligations, what was being agreed upon with United States of America as a state and institutions, each indivisible, and this will be clearer three months from now as the Security Council will examine the MINURSO file.