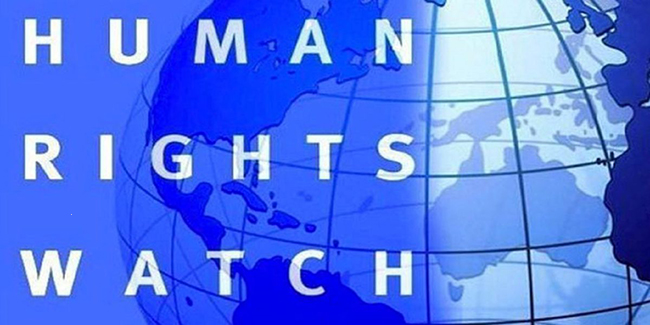 Following the publication by HRW of its 2021 annual report, the public authorities "categorically reject" the chapter dedicated to Morocco insofar as this organization persists in its inappropriate approach in assessing the human rights situation in Morocco, by disregarding, with premeditation, the methodological prerequisites and standards in force in the work of NGO's, including impartiality and objectivity, the Ministerial delegation for Human Rights said in a statement.

The public authorities deplored the instrumentalization, once more, by HRW of the human rights discourse to convey allegations and lies that embody political positions regarding the Moroccan Sahara, which are discredited by the reality on the ground and the evolution of the situation at the international scene, in particular the recent resolutions of the Security Council.

They also reaffirmed the Kingdom's strong commitment to the UN process and its support for the efforts of the United Nations to achieve a realistic and pragmatic political solution, based on consensus in full respect for the unity and territorial integrity of the Kingdom, it added.

Deploring the fact that the conclusions contained in the report are based on value judgments not supported by facts but rather by the organization's preconceived ideas about Morocco, the public authorities are astonished by the arbitrary assessment that HRW attempted to convey regarding the criminal justice system and freedom of assembly through unfounded allegations based on former specific cases, bearing in mind that the period covered by the report is exceptional as it has obliged all countries in the world, including Morocco, to take the necessary precautionary and preventive measures to deal with the pandemic in order to protect fundamental rights and freedoms and not to restrict them, as claimed by the organization.

In the same context and contrary to the allegations of this organization, the public authorities reaffirm their commitment to guarantee the exercise of associative action, freedom of assembly, and the creation of associations throughout the national territory without any restriction or discrimination whatsoever, in accordance with the provisions of the Constitution and the law, the same source added.

The public authorities also express their categorical rejection of the alleged restrictions on freedom of expression claimed by the organization, given that the persons subject to these allegations have been prosecuted for acts within the framework of common law and that most of the cases are still before the courts, which makes any conclusions or interpretations made by any party in this regard an interference in the affairs of an independent authority.

The public authorities consider that the conspiratorial approach adopted by HRW has resulted in the presentation by the organization of unreal facts and a distorted image of the reality and achievements of human rights throughout the Kingdom. It would have been rather judicious for this organization to denounce the flagrant violations of human rights against those held against their will in the Tindouf camps, who endure daily humiliation, deprivation of fundamental rights and violation of freedoms, according to the Ministerial Delegation for Human Rights.

While reiterating their rejection of the HRW approach in assessing the human rights situation in Morocco, public authorities draw the organization's attention to the fact that politicization of human rights is an unnecessary option that goes against the nature of the missions of NGOs, which are supposed to contribute in a constructive manner to the efforts of States to promote and protect human rights, the statement concludes.