FTX boss Sam Bankman-Fried arrives in US to face charges 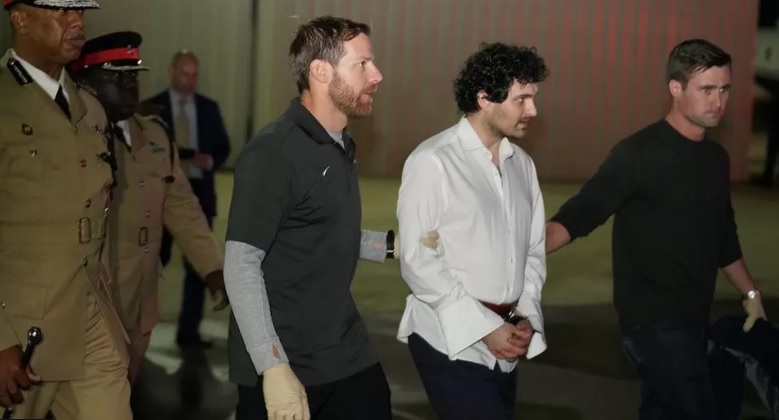 Sam Bankman-Fried, former boss of failed cryptocurrency exchange FTX, has arrived by plane in New York from the Bahamas to face fraud charges.

The 30-year-old was extradited on suspicion of committing "one of the biggest financial frauds in US history", US authorities have said.

Mr Bankman-Fried, who denies the allegations, may appear in court later on Thursday morning.

Two of his former associates have pleaded guilty to related charges.

FTX co-founder Gary Wang and Caroline Ellison, former head of cryptocurrency trading firm Alameda Research, were both charged with "roles in the frauds that contributed to FTX's collapse", Damian Williams, attorney for the Southern District of New York, announced.

They are both now co-operating with the Southern District of New York, he said in a video as court documents were released.

A lawyer for Mr Wang said his client had accepted responsibility for his actions and took seriously his obligations as a co-operating witness.

"Samuel Bankman-Fried is now in FBI custody and is on his way back to the United States," Mr Williams said. "He will be transported directly to the Southern District of New York and he will appear in court before a judge in this district as soon as possible."

"If you participated in misconduct at FTX or Alameda, now is the time to get ahead of it," he added. "We are moving quickly and our patience is not eternal."

Ms Ellison and Mr Wang face separate charges from the US Securities and Exchange Commission (SEC).

Last week, Mr Bankman-Fried was also charged with "orchestrating a scheme to defraud equity investors in FTX". The SEC said the man who was formerly nicknamed the "King Of Crypto" had built a "house of cards on a foundation of deception".

"As alleged, Mr. Bankman-Fried, Ms. Ellison, and Mr. Wang were active participants in a scheme to conceal material information from FTX investors, including through the efforts of Mr. Bankman-Fried and Ms. Ellison to artificially prop up the value of FTX, which served as collateral for undisclosed loans that Alameda took out from FTX pursuant to its undisclosed, and virtually unlimited, line of credit," according to Sanjay Wadhwa, deputy director of the SEC's Division of Enforcement.

"By surreptitiously siphoning FTX's customer funds onto the books of Alameda, defendants hid the very real risks that FTX's investors and customers faced."

FTX has filed for bankruptcy, leaving many people unable to withdraw funds.

Among the most serious allegations against Mr Bankman-Fried is that he used billions of dollars of customer funds to prop up Alameda.

Last week, Mr Williams said Mr Bankman-Fried was accused one of the largest frauds in US history.

The FTX founder was also accused of using "tens of millions" in ill-gotten gains for illegal campaign contributions to Democrats and Republicans alike, Mr Williams said.

However, Mr Bankman-Fried has sought to distance himself from accusations of illegal activity and in a BBC News interview before his arrest said: "I didn't knowingly commit fraud. I don't think I committed fraud. I didn't want any of this to happen. I was certainly not nearly as competent as I thought I was."

Mr Bankman-Fried has also denied allegations he must have been aware that Alameda was using FTX customer funds.

The FTX exchange allowed customers to trade normal money for cryptocurrencies such as Bitcoin.

Cryptocurrencies are not traditional currencies, but are stored online and act more like investment vehicles or securities - often with a high degree of volatility.

FTX had an estimated 1.2 million registered users who were using the exchange, but many have been left wondering if they will ever get back their cash trapped in FTX's digital wallets.

Mr Bankman-Fried was once viewed as a young version of legendary US investor Warren Buffett, and as recently as late October had a net worth estimated at more than $15bn.