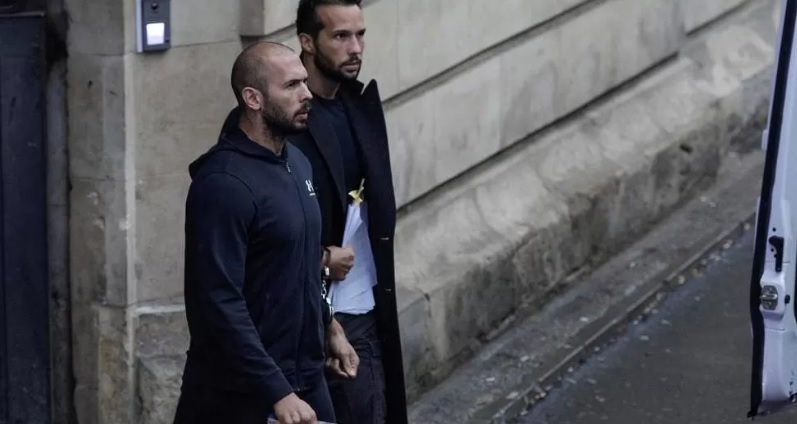 Romanian police are expanding their investigation into former kickboxing champion Andrew Tate, seizing a fleet of luxury cars from his Bucharest compound over the weekend, and raiding seven more properties - including a newly renovated villa beneath the Carpathian Mountains.

The sight of Mr Tate's shiny dove-grey Porsche perched delicately on the battered frame of a police tow truck neatly captured his shift in fortunes as, through the high black gates of his compound, a slow procession of trucks carried his prized collection of luxury cars to join him in police custody.

At the side of the road, a single fan stood watching. "I consider myself a fan," Emmanuel told me. "Every boy likes his lifestyle.

"I don't like what I'm hearing about him, but we'll see if it's true. I'll change my attitude if I see proof."

Some here see the confiscation of the cars as a sign that the Romanian authorities are preparing for the next stage in this case, securing assets as collateral against potential compensation claims from victims, in the event that Andrew Tate or his brother Tristan are charged with people trafficking.

Raids on seven more properties last week are widely seen as a sign that investigators are expanding their search for evidence in the case.

In the town of Comarnic, two hours' drive to the north, the Tate villa, freshly raided by police on Thursday, towers over the houses around it. Small homemade sheds perch against the high walls that surround the property.

Neighbours here say the property was fully renovated last year, and only completed a few months ago.

Trandafir Beldica lives in a worn housing block beside the main gate to the villa.

"The guy in charge of the construction asked me to work on the electrics, but when they explained what they wanted, I told them it was way beyond what I knew how to do," Trandafir told me.

Inside, he said, the house has "all the amenities you can think of".

"It's extremely luxurious," he explained. "It's divided into flats [and] they could afford to build a swimming pool - things that people like us couldn't even dare to dream of."

How Andrew Tate made his money is a key part of this investigation.

Police want to know whether he lured women to Romania with promises of a serious relationship or marriage, before forcing or manipulating them into working for him as models in adult entertainment chat rooms.

They are also looking into rape allegations made by one of the witnesses.

Investigators have confirmed that six women have been identified as potential victims. But last week, two of the women in the investigation publicly denied any mistreatment by the Tate brothers.

The women - who have tattoos reading "Property of Tate" and "Tate Girl" - worked in the compound in Bucharest, where Andrew Tate lived with his brother and the models who staffed his adult web-cam business.

Speaking to Romania's Antena 1 TV channel, one of the women - identified as Beatrice - said she had been "good friends" with the Tate brothers for two years and had "Tate Girl" tattooed on her arm "out of respect for them".

The other woman - Jasmin - said she had never seen Mr Tate or his brother Tristan be "aggressive or rude".

The BBC has verified their identities with a former member of Tate staff.

"I was never threatened," Beatrice said. "If I was, I wouldn't be stupid enough to stay in that house.

"You can't describe me as a victim in the case file if I'm not a victim."

Describing the moment police first entered the compound in December, Beatrice said 20 police officers charged in and went upstairs to a bedroom where, she says, two other women had locked themselves inside the room in fear of the raid.

"They broke the door down. [The women] screamed," Beatrice said.

"But the police didn't see that the key to the bedroom was lying on the bed."

BBC News has spoken to others who have different memories of the raid.

There is little clarity about what evidence investigators have gathered so far. And among the Tates' former associates, claims, counter-claims and conspiracy theories exist side-by-side.

No charges have yet been brought, but Mihaela Dragus, spokeswoman for Romania's National Anti-Trafficking Agency, says the case is already sending a strong message to both traffickers and victims.

"The fact that the justice system has decided to keep the brothers in custody, even during the preliminary phase of the [case], sends a very important message," she says.

In one of his social media videos, Andrew Tate explains why he moved to Romania in 2017.

"If she goes to the [Romanian] police and says: 'He raped me yesterday', they'll say ok, do you have evidence? Is there CCTV proof?"

None of this is evidence that Mr Tate was involved in human trafficking or rape, but his assessment of Romania's attitude to sexual crimes is not wrong, says Laura Stefan, a legal expert and prominent anti-corruption campaigner working with the Expert Forum think tank.

"In a way, he's right," she told me. "Listening to him, the way he explained why he came here, I could relate to that; I thought he made a good calculation - unfortunately."

But she says things are changing.

"Romania has a serious problem with trafficking, and I think the Romanian authorities have come to understand that this has to be dealt with," she explained.

"That means not only investigating a handful of hotshots, but also working with the victims and providing them with support."

Last year, Romania made enough progress for the US Trafficking In Persons report to take it off their watchlist.

But the report also repeated concerns about Romanian officials themselves being involved in people trafficking.

This case, involving a controversial, high-profile personality with US-British citizenship, has put a fresh spotlight on how Romania handles allegations of organised crime and sexual exploitation.

Police have less than two weeks to charge the Tate brothers, or find enough evidence to convince a judge to extend their detention while the investigation continues.

Andrew Tate's reputation is on the line. Romania's is too.