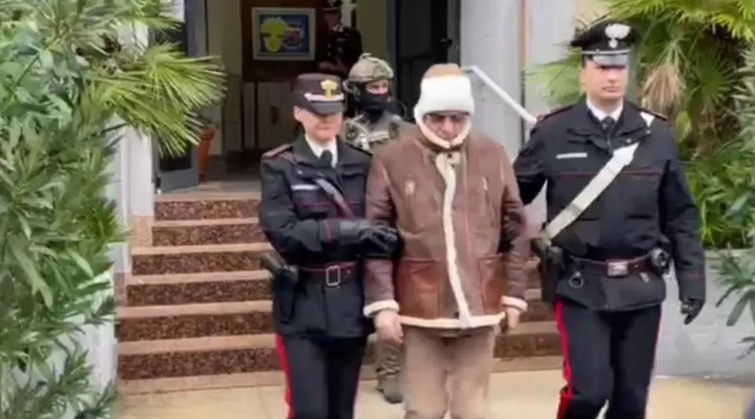 Italy's most wanted mobster was heading to a cafe outside a private Sicilian clinic when a policeman approached him and asked him his name.

He did not lie.

He merely looked up and said: "You know who I am. I am Matteo Messina Denaro."

Until that moment, the armed forces could not be sure the man really was the Mafia "boss of all bosses", who they had been hunting for three decades.

He checked in for an appointment at the clinic under the name of Andrea Bonafede.

But after years of painstaking research, and only a computerised image to go on, Italy's Carabinieri military police were confident enough he was the man they were looking for.

During his time at the top of the Cosa Nostra organised crime syndicate, Messina Denaro oversaw racketeering, illegal waste dumping, money-laundering and drug-trafficking. He was convicted in absentia in 2002 of a string of murders.

He was reportedly the protege of Totò Riina, head of the Corleone clan, who was arrested in 1993 after 23 years on the run.

That was also the year that Messina Denaro vanished. For 30 years investigators could rely only on a facial composite and short snippets of voice recordings to identify him.

Reported sightings placed him everywhere from Venezuela to the Netherlands. But it was in Palermo - the heart of his homeland of Sicily - that he was caught.

"It took so long to arrest him because, as it happened with other Mafia bosses, he was protected by a very dense network of complicities, deeply-rooted and extremely powerful in Sicily and beyond," Italian journalist Andrea Purgatori told the BBC.

Many had assumed Monday's arrest was the result of a tip-off by Messina Denaro's associates, who decided the ailing boss was no longer useful to them.

After all, for a long time Italy's most-wanted mafioso had felt protected enough "to walk freely in the streets of Palermo, the moral capital of Cosa Nostra," said Mr Purgatori.

In the end he was found in the centre of a busy city: hardly a hidden spot. After 30 years of searching, what had finally led the police to him?

At a news conference, police dismissed the theory of a tip-off. Instead, they said they had combined old-school investigative methods with modern technology to narrow down their suspects.

"Over the years, a sort of smokescreen formed around Messina Denaro, made up of a network of people loyal to him," said Mitja Gialuz, lawyer and professor of criminal procedure at LUISS University in Rome.

For over a decade, police cracked down on anyone suspected of protecting or aiding Messina Denaro. More than 100 people were arrested, including Denaro's siblings, and businesses worth over €150m (£130m) were seized.

"This gradually weakened his network and… eventually made him more vulnerable," said Gen Teo Luzi. The smokescreen had started to clear.

Meanwhile, the homes of Messina Denaro's relatives were wiretapped.

They must have been aware that their conversations were being listened to, and so only talked about "people with cancer" and "cancer surgeries" in generic terms.

Yet that was enough to tip investigators off - especially due to longstanding rumours that Messina Denaro was sick.

These intercepts, combined with monitoring of internet searches on Crohn's disease and liver cancer by Messina Denaro's associates, led the Carabinieri to assume the Mafia boss was seeking treatment.

They then gathered the details of all male cancer patients born in 1962 near Trapani, in western Sicily. Investigators zoomed into their lives, narrowing down the search to 10 suspects, then five.

One name jumped out at them: Andrea Bonafede, the nephew of deceased Mafia boss Leonardo Bonafede.

A man identifying as Bonafede is said to have had surgery in Palermo twice, in 2020 and 2021. But phone-mapping put the real Bonafede's phone far away from the Sicilian capital on one of the two days he apparently went under the knife.

When a chemotherapy session was booked under his name, the Carabinieri knew it was their chance. On Monday morning, more than 100 members of the armed forces surrounded La Maddalena clinic.

Messina Denaro was walking to a cafe when he noticed the heavy police presence. He made to turn back, but spotted more police closing off the street. He didn't run. Perhaps he, too, had known it was just a matter of time.

One of the officers, Col Lucio Arcidiacono, told Italy's TGcom24 he had hunted Messina Denaro for eight years and "felt a surge of emotion" when he saw him in the flesh. "It was him - the man in the photographs I'd seen so many times."

The Mafia boss - who was reportedly "polite and soft-spoken" - was taken to a nearby airport and flown overnight to a high-security penitentiary in L'Aquila, in the central region of Abruzzo, by military plane.

Details of how Messina Denaro lived before his arrest are now starting to emerge. He was living in an unassuming house in Campobello di Mazara, 116km from Palermo and a mere 8km from his birthplace of Castelvetrano.

A neighbour told Italian TV that he frequently saw the man and that they would greet one another regularly.

Police found no weapons in the hideout, according to initial reports, but rather luxury perfumes, expensive furniture and designer clothes.

Messina Denaro's taste for high-end items was well-known. When he was arrested, he was reportedly wearing a watch worth €35,000. Police said that far from looking like a "destroyed man", he seemed like "a well-groomed man in a good economic condition".

While he was a source of frustration for authorities and his victims' families, the fact that it took authorities so long to catch Messina Denaro fuelled his myth, said Prof Gialuz.

"Of course, he was forced to live extremely cautiously, and had to calculate every move to perfection."

His associates' internet searches may have contributed to Messina Denaro's arrest, but it is unlikely the boss himself ever used technology because of the risk of leaving digital traces.

"A Mafia boss, in order to continue to operate undisturbed, has to stay away from technology, and return to an almost primitive way of life, going back to the roots of verbal communication, and creating a parallel and sophisticated secret code of communication with his allies," Prof Gialuz explained.

Italians have been transfixed by the arrest. Prime Minister Giorgia Meloni flew straight to Sicily to congratulate the armed forces as praise poured in from all sides of the political spectrum.

"Messina Denaro was the last godfather of the most ferocious generation of mafiosi. After he went into hiding, Cosa Nostra completely changed its attitude, becoming a more silent and almost invisible, submerged organisation," journalist Andrea Purgatori told the BBC.

The mobster once boasted he could fill a cemetery with his victims. Mr Purgatori said until the 1990s, murders were being committed on a daily basis.

"Messina Denaro committed some of the most violent and cruel crimes Italy can remember," he said. In 2002 he was tried and sentenced to life in jail in absentia. His murders include:

University of Essex criminology professor Anna Sergi told the BBC it was doubtful Cosa Nostra could survive without its mythological boss, who had become the symbol of the Mafia's resilience.

"Who is going to take over - or indeed if anyone can - remains to be seen," she said.