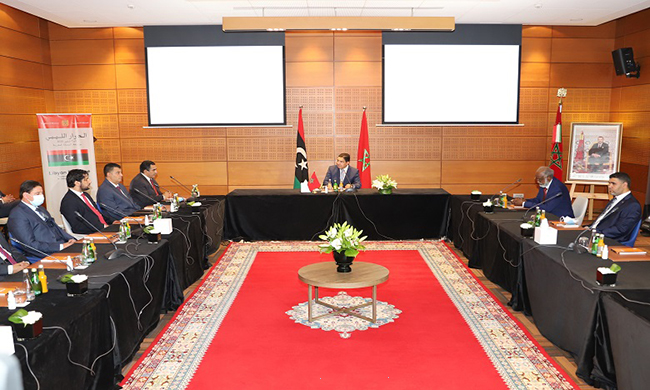 Two representatives of the delegations of the Libyan High Council of State and House of Representatives said, Friday in Bouznika, that the two parties have agreed on concrete measures and reached "very advanced" stages on the issue of positions of sovereignty.

Speaking to reporters following a session of the consultative meeting held in the framework of the rounds of the Libyan Dialogue, the representative of the Libyan House of Representatives, Mohamed Al-Raid, underlined that the two committees dialogue agreed on concrete measures regarding positions of sovereignty, adding that after agreeing on the criteria for applying for these positions, they will develop, on Saturday, the application forms through a commission in charge of receiving the candidatures, studying them and submitting them to the vote of the two chambers.

For his part, the representative of the Libyan High Council of State, Omar Abu Lifa, said the two parties are in the process of finalizing the aspects related to the positions of sovereignty and that they have accomplished most of what is expected, adding, in this regard, that everyone agrees to proceed as quickly as possible in order to support the achievements obtained on the constitutional path and on that of the executive power.

He underlined that the previous meetings and agreements on the constitutional process and the executive branch have given a strong impetus to the resolution of all the outstanding issues, noting that things are moving forward in a positive atmosphere and that everyone is optimistic about obtaining "very reassuring" advances.

MM. Al-Raid and Abu Lifa expressed, on this occasion, their thanks and gratitude to the Kingdom of Morocco for its continuous efforts in hosting the meetings of the Libyan stakeholders and in facilitating the convening of Libyan Dialogue. The seven positions of sovereignty, subject of negotiations, are those of governor of the central bank, president of the administrative control authority, president of the National Authority for the fight against corruption, president of the Libyan High Electoral Commission, President of the Supreme Court and Attorney General.

This new round of dialogue took part following the previous sessions held by the two parties in September, October and November 2020 in Bouznika and Tangier, which led to "comprehensive agreements on the criteria and mechanisms for holding positions of sovereignty, provided for by article 15 of the Libyan Political Agreement concluded in December 2015 in Skhirat".