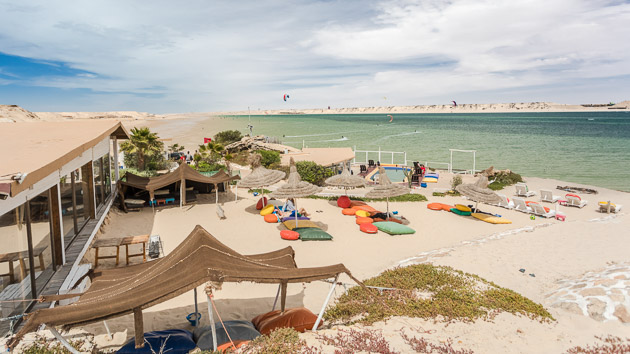 Dakhla is the pearl of the Moroccan Sahara and the city where the desert atmosphere and sand dunes mix with the salinity of the sea and its waves that extend along its coast, which opens its arms, especially to water sports enthusiasts.

If you want to learn about the many secrets of the desert and its diverse beauty, do not hesitate to make your destination to Dakhla. And if you want to get acquainted with the city's fisheries dishes, while practicing water sports or even just meditating, Dakhla welcomes you.

The city of Dakhla is located in the Moroccan Sahara region, 530 km from the city of Laayoune, and 1,700 km from the capital, Rabat. It is a peninsula that extends to a depth of 40 km in the Atlantic Ocean.

The history of the establishment of the city of Dakhla dates back to the year 1884 when it was then a Spanish colony bearing the name Villa Cisneros, and it is likely that this name derives from the name Francisco Jimenez de Cisneros, a Spanish cardinal who lived in the sixteenth century AD.

The city of Dakhla has an airport of international standards, which receives 330,000 passengers annually, and is directly linked to the Moroccan cities of Agadir and Casablanca, and at the international level to Las Palmas and Paris. It can also be reached by land via National Road No. 1 through public transport buses that connect it to major cities such as Marrakesh, Agadir, Laayoune, and Guelmim.

It is also expected that the Tzint-Dakhla highway project, which is nearing its end, will be a new and fast way that will bring those wishing to travel there by land, and discover different scenes of desert nature in particular.

The city's infrastructure also provides a range of options for classified hotels and guesthouses with a total of 43 classified units (with a total of more than 1800 beds), and therefore, the choice will not be difficult for you.

Dakhla has a constant water temperature all year round (25°C), which makes it suitable for most water sports. The constant winds also made the place for surfers with sails and boards a real paradise, without neglecting the possibility of hiking in boats in the midst of calm and tranquility that enables the tourist to explore Dakhla Lake and visit the surrounding islands.

It is a wonderful feeling to open your eyes in the morning to the view of the sea and the sound of roaring waves, after a night spent in a tent among the sand dunes, in a surfing camp, for example.

The temperature in Dakhla is moderate throughout the year and ranges between 14 at the minimum and 28 at the highest degree. This may vary slightly from year to year, but it is certain that it is one of the most beautiful climates not only in the region but also in the world.

Sand dunes as far as the eye can see

In Dakhla, there are many natural and environmental sites that allow breathing fresh air, contemplating white sand dunes, and practicing activities in them. There is Dragon Island, the sites of "Puerto Rico" and "Oum Lambouir", the coastal resorts, the "Imlili" natural resorts, and the source of the natural hot sulfur water.

In the midst of all this, Dakhla Bay, which cuts through a desert plateau with an openness to the ocean, invites you to moments of pleasure and to overcome daily fatigue and exhaustion, amidst the remarkable activity of local fishermen who roam the coast.

As for Dragon Island, located in the middle of the bay, it is an ideal place to bathe in turquoise waters, take a white mud bath, discover the landscapes surrounding the island, and head towards the rocky heights that dominate it. The place will also make you get acquainted with rare biodiversity with crabs and different types of birds, which are things that photography professionals love.

Not far from the city, you will find sand dunes that take your body and soul from the blue of the water to the expanse of the desert and its sands. You can also enjoy the wonderful "Imlili" site, which is located 130 km southeast of the city of Dakhla that contains 160 permanent water pockets rich in fish species, in addition to other types of rare plants and animals.

Try not to miss the opportunity to visit biological reserves that host several endangered species such as Dorcas deer, monk seals, migratory birds such as pink flamingos, as well as a number of species of turtles.

On the outskirts of the city, there are important archaeological sites such as rock carvings in the Karkaar Mountains, archaeological remains in the Anzran well, sand dunes famous for the "sugar mold", in addition to various historical landmarks such as the Spanish Catholic Church, the ancient marine lighthouse on the coast of Dakhla, and the main gate of the old administrative city.

With its mild climate and 667 square kilometers of coastline, Dakhla also attracts professionals and amateurs of windsurfing from different regions of the world, as Dakhla was ranked among the best places for surfing in the world. If you are a fan of these sports, then Dakhla will certainly be your haven, otherwise, watching the national and international competitions organized throughout the year will be enough for you to enjoy the region.

You may also be a fan of historical monuments, and here the city of Dakhla will not deprive you of a unique experience and a historical landmark, which is the Nuestra Señora del Carmen Church, which was built by the Spanish colonialists more than six decades ago. The church is distinguished by the Spanish architectural style, which significantly affects the city through its neighborhoods that were inhabited by the Spaniards before they turned into housing for soldiers and a group of public administrations later.

And because the city of Dakhla is the city of the ocean par excellence, there is nothing wrong with taking a look at the old marine lighthouse, which is 60 meters long, overlooking a rugged sea cliff in the west of the city on the Atlantic coast, which was established to guide ships. And near the same lighthouse, you find "Lambris", an ancient historical landmark that was a marine lighthouse before the Spaniards turned it into a prison where
many Moroccan resistance fighters who fought to expel the colonialists from the region were imprisoned.

Mix with the culture of the region

If you happen to visit the Dakhla Festival, which is organized in March of each year, it will be an occasion to celebrate with the festival visitors the sea and the desert and what they represent of the momentum and richness of the Moroccan Sahrawi culture. It is really your chance to enjoy and explore the cultures of the Sahara tribes, especially through the musical masterpieces created by the desert nomads.

The city of Dakhla abounds with a Hassani heritage rich in its rituals and cultural and artistic demonstrations, and its distinctive clothes such as the M'lahfas for women, and the Darraa for men, and its distinguished literature that begins with Hassani poetry and ends with the traditional songs of the region, passing through the popular story.

It is inconceivable to visit and leave Dakhla without trying the fresh fish meals, as well as the traditional cuisine of the region. The city of Dakhla is mainly famous for marine products, as the peninsula's tables celebrate oysters, lobsters, and hammar, and give them special importance, and there is a large farm for the production of oysters in its lagoon. As for the sea bay, it is also rich in lobsters and langoustines, in all their red, green, and royal colors. And you can taste this seafood in the city's restaurants, which are prepared in different cooking ways.

With regard to Sahara dishes, you can enjoy a traditional meal, which is prepared from rice and meat and marinated with olive oil and salt, not to mention the well-known couscous, which is baked five times by hand, and five special herbs are used in the process of cooking and preparing it.

Camel meat is also very popular in the region and can be eaten with couscous or other traditional meals, or on its own by cooking it grilled. These dishes are served accompanied by the wonderful Sahara tea, whose preparation in this region is subject to real and very accurate traditions.

It is the city of Dakhla, where you can find what you will not find in others. It is the jewel of the Moroccan Sahara and the spirit of warmth and love in the four seasons of the year when the world is so cold.