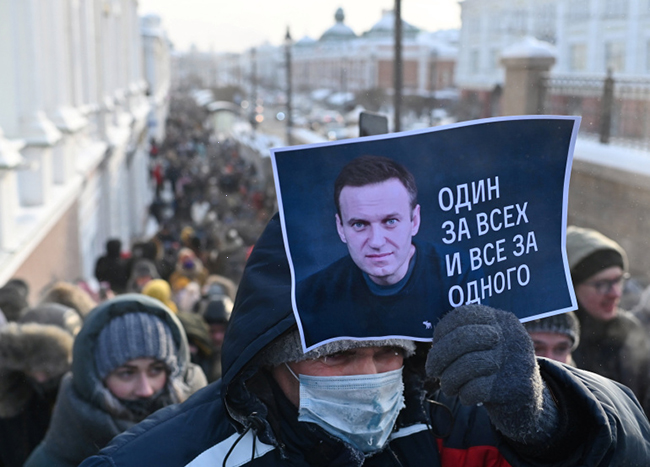 Russia has renewed calls for evidence of the poisoning of dissident Alexei Navalny following new EU sanctions and US punitive measures.

"It is outrageous" that the US claimed that Russia's domestic intelligence agency FSB was behind an alleged poisoning of Navalny, Kremlin spokesman Dmitry Peskov said on Wednesday.

Washington and Brussels should have had evidence of the poisoning, he said, according to Interfax agency.

On Tuesday, the US and the EU imposed sanctions over Russia's persecution of the now imprisoned vocal opponent of Russian President Vladimir Putin.

Russia doubts that there was an attack on the leading opposition figure on August 20 with the internationally banned chemical agent Novichok.

Four laboratories, including one belonging to the German armed forces, had detected the nerve agent in Navalny's blood.

The EU initially imposed sanctions because of the poisoning. After Navalny was sentenced to more than two years in prison in February, Brussels added further sanctions on Tuesday. The US followed with its own sanctions.

Peskov called the steps unacceptable and damaging to Russian relations with the EU and the US. It was an interference in Russia's internal affairs, he said.

At the same time, he said that the punitive measures would be ineffective against the Russians concerned. "These people do not travel abroad anyway and have no right to open accounts in foreign banks or have property abroad," he said.

The new EU sanctions are aimed at those responsible for Navalny's detention. Russia's Prosecutor General Igor Krasnov and the head of the Central Investigation Committee, Alexander Bastrykin, are affected.

In addition, the head of the penitentiary system, Alexander Kalashnikov, and the commander of the National Guard, Viktor Zolotov, are named.

"The fact that minors are being enticed to participate in unauthorized street action is of course a breach of the law, and according to the law there has to be a reaction," Putin said at a meeting with Interior Ministry representatives on Wednesday.

Between mid-January and early February, tens of thousands of people - including many youths - took to the streets to demand Navalny's release.

Officials have repeatedly accused Navalny's supporters of misleading young people and encouraging them to break the law.